© 2021 Copyright Blacksmith
Lighting up the Western Balkans: Why democratic change will come only through citizens
17140
post-template-default,single,single-post,postid-17140,single-format-standard,bridge-core-2.6.5,ehf-template-bridge,ehf-stylesheet-bridge,qode-page-transition-enabled,ajax_fade,page_not_loaded,,qode-title-hidden,side_area_uncovered_from_content,qode-theme-ver-25.0,qode-theme-bridge,disabled_footer_top,qode_header_in_grid,wpb-js-composer js-comp-ver-6.5.0,vc_responsive,elementor-default,elementor-kit-269

12 Apr Lighting up the Western Balkans: Why democratic change will come only through citizens

We use this opportunity to invite you to the first public event we are organizing as part of the Engaged democracy initiative (EDI) process, launched in September last year. The first public discussion and presentation of the initiative, “Lighting up the Western Balkans: Why democratic change will come only through citizens” will be held on April 15, from 14:00 to 15:00h in the form of a Zoom live stream.

Apart from members of EDI team, speakers at the public discussion will be Iva Marković (Right to Water, Serbia), Samir Beharić (Center for Education and Socializing Jajce, Bosnia and Herzegovina) and Gresa Hasa (Shota, Albania). Together we will discuss why democratic bottom up engagement is necessary for change in the Western Balkans and what are the challenges and opportunities for the regional cooperation, including the role of women and women’s solidarity in the region.

Engaged democracy initiative came about through a cooperation between 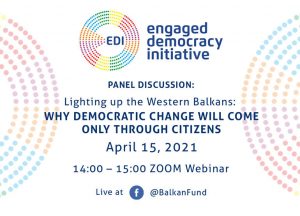 European Fund for the Balkans (EFB) and the Institute for Democratic Engagement Southeast Europe (IDESE). Together with representatives of local initiatives and movements, free and independent media, engaged members of academia and socially responsible companies, we are building an process that will support the work of engaged citizens and potentially enable easier networking, exchange of experiences, knowledge, information and other resources, all with the aim of making our societies freer, more democratic, open and fair.

In the previous period, we organized working meetings with engaged citizens, as well as representatives of local, independent and engaged media from Serbia, Montenegro, North Macedonia, Kosovo, Bosnia and Herzegovina and Albania. We discussed the experiences, needs and difficulties in the work of local initiatives and movements, as well as the potential of regional networking and joint work on specific topics.

Over the next few months, we will initiate a number of other activities, including thematic regional meetings and preparations for a major EDI convention scheduled for mid-September in Belgrade, which would mark the launch of a regional network of active citizens.

We are pleased to invite you to attend this online event on April 15 and give your valuable contribution to the discussion. The working language of the event is English.